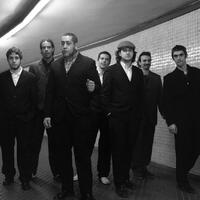 Soweto was born in Gracia, one of Barcelona's most popular districts, towards 1998. A group of friends deeply captivated by Jamaican music and traditional black music sound decide it is time for action: No more just listening, now it is time to create their own music inspired on the music they love. It was not an easy way until their first concert in 1999 but through live performance the group of friends starts to become a solid band. After all they found on the stage and through direct contact with their audience the real sense of their music. Band keeps its pace in a slow but constant way full of concerts and also some members change. Their talent shows up in every new concert and their songs become more consistent. Soon specialized press put their eyes on them. Right now Soweto is one of the captains of Jamaican music in Barcelona. Seven musicians on their way to become one of the top bands in Catalunya and why not, in Spain. The band has just released a new maxi single , "Selects"; where they show the evolution of the band music and their present interests. It is a disc not only addressed to all the people who regularly listen to this kind of music, many of them already Soweto followers, but also for those who don't know much about Jamaican music or the band but who for sure will like this kind of sound. After all, one of the main Soweto goals is to try to renew and to rediscover an almost forgotten music style; Jamaican music with a little touch of Jazz and American rhythm & blues.
AUDIO / VIDEO

(there are no concerts available)

(there are no news availables)