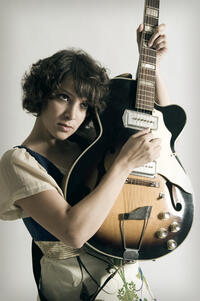 Immensely talented with a guitar and gifted with a soulful voice beyond her years, Gaby hails from Guatemala, but has called Los Angeles home since touching down in 2001.

Winner of the 2007 John Lennon Songwriting Contest, "Maxwell Song of the Year" via "Escondidos" helped garner exposure and was a huge step in the right direction. Her pace has quickened since, with songs like the irresistibly funky "Greenhorne Man" being featured by television shows such as ABC´s "Lincoln Heights" and "Ghost Whisperer" and MTV´s "The Hills." She was then given the task to write the theme song for NBC´s "Parks and Recreation" which was nominated for an Emmy award in the theme song category.

In August of 2009 Gaby toured along with established singer/songwriter Tracy Chapman. Later in November of 2009, Gaby was thrilled to open for the fiercely independent and adventurous soul, Ani Difranco, on an east coast tour. Such an impression was made that once again, Gaby was invited back for another leg in late January and February 2010.

Whether she´s belting traditional Guatemalan ballads or ripping up funky blues inspired riffs, Gaby Moreno is on the rise. Opening for Tracy Chapman and Ani Difranco in the states led to Gaby performing alongside Van Dyke Parks on his Pan-American Orchestral live show in 2010.