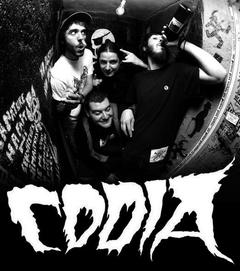 CODIA begins at the end of 2007 in A coruña, with members of anothers bands of the same city like Nasghul, Blünt, Under the waves and Potombo, their influences are punk rock and old school hardcore. In the middle of june we recorded our first album "mala hierba nunca muere", it was edited by tabano records and la nave del misterio. In october 2008 we went on our firts tour by the north of spain, france and switzerland. IN september 2009 we have recorded 10 new songs and one old song to our second LP called "Dulce Apocalipsis", in Bonham studios!!! it have been released by some lables from Spain and Italy....