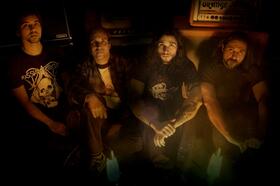 Alicante is the capital of the province of Alicane in the south of the Valencian Community, mostly known in the history as an important Mediterranean port. I learned about the city years ago, when all I did was proving the well-known fact that football is the most important secondary thing in the world, by being a passionate fan of Spanish Primera Division. But years later, I’m meeting with a band whose psychedelic/space rock is indeed something exceptional. Progstravaganza X presents you Pyramidal.
Nick: There are psychedelic/space rock bands which music is relying on each other’s, but you guys managed to create something different with the debut Dawn in Space. What was your approach and were there any strict rules you mapped out before entering the whole process?

Pyramidal: There are no rules, we are just four guys jamming a while trying to do our best, keeping the music psychedelic and loud. We love to jam together, it’s very inspirational. Sometimes the thing start with a guitar riff, other times with a drum rhythm, we try to keep that feeling alive to make the record.

Nick: Tell us something about your beginnings? How did you guys hook up together and started to jam?

Pyramidal: We all come from other different projects. We’ve been playing in a lot of bands before, with some different kinds of influences from stoner to psychedelia or prog rock. One day, we started to play together and we felt that didn’t sound bad, so we kept going until today.

Nick: I mentioned jamming, how much indeed your work is based on jamming and improvisation?

Pyramidal: It’s based a lot on the improvisation. It’s our way to work, we start with the improvisation and we add some shapes to the music on the run. Sometimes somebody comes with a riff and we work on it, but usually we just start to jam together and see what it comes, sometimes it’s more dark and heavy, sometimes it’s more psychedelic, it just depends on the mood.

Nick: I could track the critics’ opinions on your music and while all of them are more than good, how much you are with general reception of Dawn in Space?

Pyramidal: We’re very pleased with the album’s reception. For us it’s unbelievable – all that good responses. We didn’t think that it would work so good and all the help we received, and of course, working with efficient people like Prog Sphere makes the things easier.

Nick: Dawn in Space comes in two version, one is standard jewel case CD and there is also limited edition of double gatefold LP, with different art cover and two previously unheard tracks. Tell us something more about these two tracks. Are they originating from the same session as the rest of material from the album?

Pyramidal: Yes. These two tracks are “b-sides” from the studio recording sessions of Dawn in Space. We have some extra material from the studio with all the jams we’ve done. But we had to choose what to include on the album.

Nick: How much chance do you have to present your music live? Have you played out of Spain?

Pyramidal: We still didn’t play out of Spain, here the things are difficult for the underground music, it’s always been like this. But we’ve planned to tour in Europe, we are available for any offer to go and play as far as we can.

Nick: I have to ask a question about Black Land song. Whose idea was to include the call for prayer at the end of the track? It fits really good with the rest of the song.

Pyramidal: Well this song is like a mantra for us, it’s getting higher till it explodes. It’s like getting’ the nirvana, it’s some kind of trip in mind. The prayers represent for us that request for this trip on a spiritual way.

Nick: On the Progstravaganza sampler you are presented with the title track. Would you mind telling something about it? Can you recall of anything regarding this song while it was in the making process?

Pyramidal: This was the first song we composed. The song has a very nice mixture of our influences, the first part it’s more a progressive melody, some space and psychedelia too, and in the second part the song explodes into a Sabbath style riff that bring you back to earth.

Nick: Your influential spectre could be reduced to a mighty trio consisting of Black Sabbath, Pink Floyd and Hawkwind. Are there any obscure bands that have influenced your work on the album and that serve you as inspiration?

Pyramidal: Well, Black Sabbath is a pretty obscure band, even Hawkwind or Pink Floyd sometimes, but we also like the late 60′s obscure psychedelia from bands like High Tide or Arzachel and the experimental sounds from krautrock bands like Ash Ra Tempel, Neu!, Can, Electric Orange, Kraan, Guru Guru… They’re pretty obscure and hypnotic in their way.

Nick: If you would be able to choose bands to share a stage with, what would be your choice and why?

Pyramidal: If it was in our hands we would love to do a gig with the spacerockers Litmus or Farflung, we love these psychedlic bands. We also love the prog rock from Ga’an, Astra or Diagonal. There are many good bands now out there that would be great to share stage with: Lumerians, Eternal Tapestry, Causa Sui, Colour Haze, White Hills… And recently we discover the band Zombi, they’re just synths and drums and they make some awesome music.


Nick: Some time ago I had a chance to review an album from the band Domo. They are from Alicante too and as far as I know you are good friends with them. I made a joke about your hometown, saying that it’s not going to be known anymore by a football club of the same name. How is the club doing? I didn’t follow Primera Division for a long time, but if there would be such a league in the field of spacepsyche rock, you guys would probably be a regular participant of the Champions League.

Pyramidal: The football team went down to the second division and we hope that this don’t happen to us too! Actually we share one member with Domo. Our guitarist and singer is the bassist and singer of Domo, so we are like a big family.

Nick: What are your future plans? Can you say in which direction your music will develop after Dawn in Space?

Pyramidal: We always find time to jam a while from time to time and new things are coming. Maybe we can say that we’re taking a more prog rock way on the new tunes, but keeping it always heavy and psychedelic.

Nick: Is there anything you would love to add that I didn’t cover in my questions.

Pyramidal: Well, we hope to see you soon somewhere on stage. Thank you all for your help and support.

Nick: Thanks a lot for your time. It’s a pleasure working with you guys. Keep up good work!

Pyramidal: Our pleasure! Thank you!