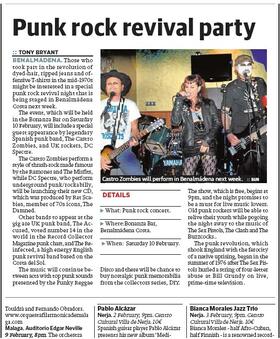 The event will include a special guest appearance by legendary Spanish punk band, The Castro Zombies, and UK rockers, DC Spectres.
Those who took part in the revolution of dyed-hair, ripped jeans and offensive T-shirts in the mid-1970s might be interested in a special punk rock revival night that is being staged in Benalmádena Costa next week.
DETAILS
What: Punk rock concert.
Where: Bonanza Bar, Benalmádena Costa.
When: Saturday 10 February.

The event, which will be held in the Bonanza Bar on Saturday 10 February, will include a special guest appearance by legendary Spanish punk band, The Castro Zombies, and UK rockers, DC Spectres. The Castro Zombies perform a style of thrash-rock made famous by the Ramones and The Misfits, while DC Spectres, who perform underground punk/rockabilly, will be launching their new CD, which was produced by Rat Scabies, member of 70s icons, The Damned.

Other bands to appear at the gig are UK punk band, The Accused, voted number 14 in the world in the Record Collector Magazine punk chart, and The Reinfected, a high energy English punk revival band based on the Costa del Sol.

The music will continue between acts with top punk sounds presented by the Punky Reggae Disco and there will be chance to buy nostalgic punk memorabilia from the Collector's Series, DIY. The show, which is free, begins at 9pm, and the night promises to be a must for live music lovers. Old punk rockers will be able to relive their youth while pogoing the night away to the music of The Sex Pistols, The Clash and The Buzzcocks..

The punk revolution, which shook England with the ferocity of a native uprising, began in the summer of 1976 after The Sex Pistols hurled a string of four-letter abuse at Bill Grundy on live, prime-time television .