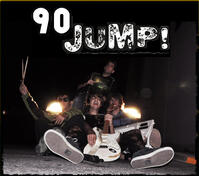 Martinez, and we´re 90Jump!
90 Jump! was created on 6th July 2010, our
drummer birthday too. This day, Adrian Canton (Guitar/Vocals) and Unai Prieto
(Drums) has an interesting idea: to found a new music group. Originally the
group was composed only for 3 members, Adrian Canton on guitar and voices, Unai
Prieto on dums and Jose Galbis on the bass. They play american punk
rock/pop-punk. On September 2010, Gerard Martínez, on keyboard, sign up in the
group. Few months later, 90 Jump! started to do their own songs. On this period,
90 Jump! has acted in 5 concerts, 4 of them in Vilanova, 90Jump´s orgin´s city,
and 1 in Ribes Rock Festival.
After this first period, the bassist Jose
Galbis left the group, and his place was taken by Gerard Minella. With Minella´s
entry, the group changed a little bit his style, and started to have Alternative
Rock influences. In this second period, 90Jump! has had about 5 concerts too,
possibly more important than the firsts, like a concert in the UPC (Politechnic
University of Catalunya) or a participation in the BigCast Live. Logically,
90Jump! continued composing new songs.
But after this, the changes didn´t
stop. Minella left the group after 5 months, and we had problems to find a new
bassist. Because of this, Adrian picked up the bass, and 90Jump! try to find a
new guitarrist. This gave good results, and Sebastian Knizel sign up in the
group. With Sebas, 90Jump! style changed. In this last period 90Jump! acted with
groups like "La Gossa Sorda", and recorded their first demo.
Actually
we´re working on new songs, with a characteristic style, a mixture between
alternative rock, indie, american punk and rock.