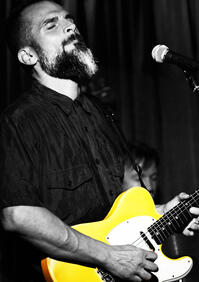 Raul Del Moral is the frontman, guitar player and singer of this amazing blues band from Barcelona. With his record "When we humbly play the blues" he demonstrates, he is an exceptional musician in many different aspects. The blues in its pure state.

With a killing guitar tone and voice and a very powerful live performance Raul Del Moral wrote a record of original songs that sound like a mix between ZZ Top, Stevie Ray Vaughan or Robben Ford.

The band performs around the world in numerous venues and festivals and has a faithful audience in their hometown.

Don´t miss him, you won´t regret.